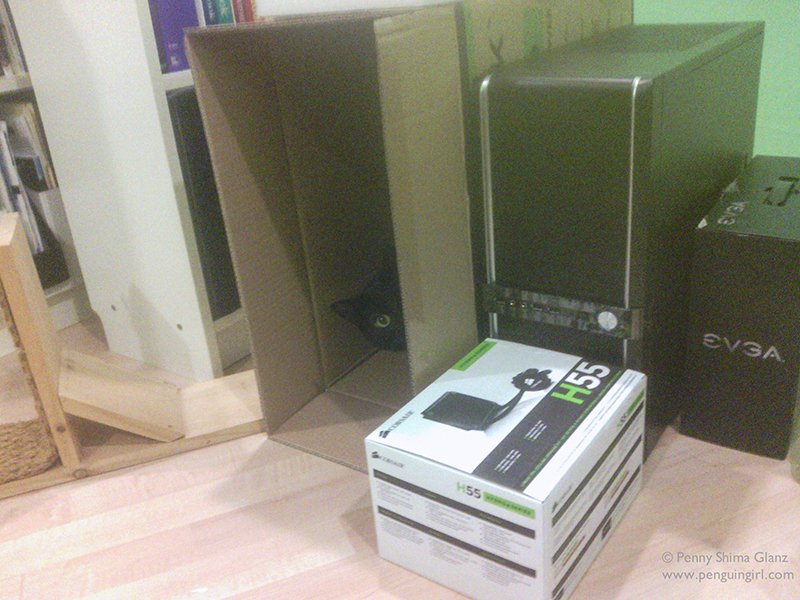 We built E a new computer last week and continued the kitten’s technical education*. He’s not as interested as we are about the various components, but he enjoyed helping while we put it together. There were many boxes and small parts he needed to keep track of, and when we weren’t paying attention, much fun to play with. He really enjoyed the box the case came in and is sad we took it away for recycling.

* He also also receives lessons in many subjects including but not limited to Star Trek, Star Wars, Harry Potter, Hebrew, and pop culture.

Summer boldly announced its arrival here in the North East this week. While I have little desire to leave the naturally cool sanctuary that is my basement office/studio, my wanderlust is quite strong and thankfully isn’t fulfilled by distance traveled, but by new experiences.

Sometimes it’s simple enough to mix things up and break the routine to make it feel like an adventure. How? We try to find an alternate route to the grocery store or I’ll run one of my routes in the opposite direction from my general habit. The new perspective is refreshing.

At other times more needs to be done and we try for a Sunday adventure. There are tons of websites offering advice on road trips long and short– the internet has completely changed what is an off-beat attraction and how to get there. I love the integration of information and maps even if I do miss the hours spent sitting on the floor (or the bed) surrounded by messy piles of research materials and notes.

I don’t have a specific destination or trip in mind, but I’m having fun exploring and imagining the possibility of the new site Road Tripper. I wish I had thought to plan ahead and check a recent short excursion on the Weather Channel’s Trip Planner, bringing a sweater would have been nice. I still virtually turn to The New York Times Travel section and refer to various general travel books. For local events and things to do, I find that I’m turning often to the local Patch.

What resources and websites do you turn to for help planning your next adventure? 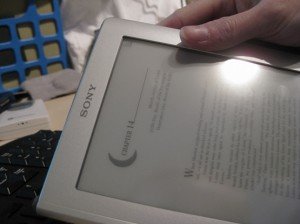 Last week I hinted to a recent addition to my reading arsenal. A week later I’m still gathering all my thoughts but I am pleased with my decision.

It was not one that came easily, though it was one driven by a need for lightness. My bag collection causes my husband some frustration and I realized that instead of slimming down with what I was carrying back and forth it was gaining weight.
Much of it was stuff that I need to have on hand for reference, but rarely if ever actually need (thankfully).
Much of it was magazines that I rarely read in a timely manner, such as The Economist.
Much of it was my beloved A5 filo, crammed full of my calendar and notes.
Much of it was knitting patterns and my stash and queue printout from Ravelry.
Much of it when piled on a scale added up to about 5lbs (2.26kg). That’s a lot to schlep back and forth each day.

So I looked around and tried to lighten my load. I removed a few sheets from my filo and put a magazine in the bathroom, but that was about it. I also was threatened with a few tech books and as they often outweigh me I was skeptical if I could find a solution among the various things around the house.

Wait, don’t I own a netbook? Yes, Akepa is doing well, but is very happy to be an at-home computer and tethered within three hours. He likes to hang out near the kitchen and that works out well for me. The battery life was an issue and I’d get every minute out of him I could, but that technology just isn’t there for my needs.

So I began to look around at the rest of the offerings. Most tablets are 4 pounds or more and that doesn’t seem to be a large enough gain for me to invest in one. I looked long and hard at kindles and queried friends who own them like crazy. I followed CES more than I normally do to see if there was something in the near forecast that begged for me to wait. I didn’t ignore the apple announcement, but seriously, few could.

Part of what I do (new site launching soon) is make an evaluation and decide if there is a good fit between technology and need. Sometimes the answer is surprising and a pencil is sharpened instead of a fancy custom database system, yet sometimes the pencil is put down and code is written. Sometimes after all the pieces are looked at I break down and accept installation a windows server (albeit with sad reservations). Sometimes I need to look at something for me, and I find this harder than advising clients. I try hard not to have them spend their budgets foolishly, but I find myself unable to stand firm when the decision centers around my bank balance.

So how did I end up with the Sony Touch? Size and weight, library book access, freehand and text annotations, and memory expansion. The ability for me to access some of my RSS feeds, and the joy of being able to access my electronic subscription to The Economist while E has the paper copy is priceless (thank you calibre).

Is it perfect? No.

Am I still in love after a week? Yes.

In the coming weeks and months I hope to be able to explain more about what works and what doesn’t. I ask for patience as I get the volumes of thoughts out. A big item that didn’t was my completely ditching my filofax. A trip to the hardware store has me striking back and trying something different. Will it work? I hope so. If it does maybe you’ll be able to buy it soon. If it doesn’t, I tried and had quite a bit of fun in the process.

What follows are two books I completed this past week. There were also two massive tech books in there that shall remain nameless to protect the innocent. If in time I feel they need to be revealed I will do so. There isn’t anything bad about them but there wasn’t anything good or remarkable about them either and I’d rather move on.

The Key of the Keplian: Secrets of the Witch World
by Andre Norton

As I find it difficult to get my hands on any copies of Norton’s witch world series, this was my first foray into that land. I really enjoyed it and am now in the middle of “Secrets of Witch World” which also includes The Key of the Keplian. I guess the fact that I immediately started reading The Magestone speaks for how much I enjoyed The Key of the Keplian. Parts of the plot and character development left me rolling my eyes but overall I found it a fun fantasy escape.
I borrowed them from the library and I’m reading these on my new touch and enjoying the adventure.

Dragon Mage: A Sequel to Dragon Magic
by Andre Norton

This was another $1 bookoff find. ;)
I found it interesting to read and I’d like to read Dragon Magic too. Anything with a lead character with a background like Shilo’s will tug and my heartstrings.

I’ve struggled to get all 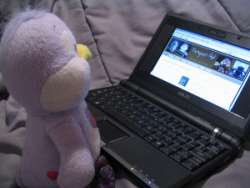 of my work done the past few months as I have slimmed my bulky bag down. After much research, hemming, hawing, and a very careful examination of my business finances I brought home a very little laptop Friday afternoon.

So, how do I see this assisting me in my work? In my writing?

Well, it ships with 1.3g free space, a terminal with SSH & vi, open office, a pdf viewer, and is linux. I opted to bring home the one with the webcam, though have not yet played with it. In theory the battery life is over 3.5 hours (more if I am not on wifi).

You see, I bounce around a good deal. I do not have an office (beyond the one at home) and I squat in a conference room by one client (let’s call that point A) whenever possible. I am at point A for 4 hours, 4 times a week. Then I go to point B for lunch (when I remember to eat), Clients often happen at random times in the mid-to late afternoon and twice a week (6-9p) I am on campus (during the term). I have determined that I cannot do the work I need on a crackberry and sadly my filo can’t fulfill all my needs. While I like wifi I don’t always need it. I need access to spreadsheets and a text editor. That I can do basic powerpoint and word is an added bonus. I often have at least 3 hours between appointments, but since it takes about an hour to travel home from midtown (and back again), I don’t really see the point in going home between (though it would mean more knitting).

It needs a name. I’m partial to animals (or nouns) in non-English languages but languages I sort of “know”. To that extent: French, Hebrew, Hungarian, Czech, and Japanese are all open. I was thinking of something emphasizing the small and lightweight joy… I’ve thought (and semi rejected) feather, mouse, lace, humming bird… Suggestions? If you provide the winning name, I’ll send you something within the next 365 days. (I feel bad, Dave is still waiting for his prize).

and it’s better than ever.

It’s been a very long week. The past few days have been awesome but beyond insanely busy. Thankfully my RAM and usb2ps2 convertor came yesterday and my wonderful husband installed it for me (we fight over who gets to do the geek things). I came home a short bit ago, and didn’t have to deal with small screws and putting in the chips and I knew that my keyboard would work (a huge relief).

Using my keyboard is a bit surreal, it brings back memories of undergraduate life both good and bad. It is a bit freaky to have my laptop is just sitting there and the words [that I’m thinking] will appear on the screen without my fingers on its keyboard. (I’ve played vnc tricks on people but this is really weird).

I’m not going to show you a picture of my keyboard because I don’t want to be responsible for anyone loosing their lunch. I still have much to do in terms of cleaning before E might touch it. ;) Rubbing alcohol and qtips ar emy friend. That the keys pop off super easy too has always made me happy.

Even with the extreme grime, using it is beyond awesome. It is quite comfortable to type, and to type with dvorak no matter which application I’m in. I have to fix a few things to make everything work as I want but by default? Life is pleasant and can only get better. Some people have complained thath there are a total of 12 keys that only the thumbs (6 each) can use. I’m a bassoonist. This is child’s play and there is actually less reach for me on this keyboard than on a horn.

Having the extra gig of RAM has also been what I needed. When I get a chance to spend more than the half an hour just now (such as the next couple of hours) I’m quite sure I’ll come to realize how nice this present to myself is.

After next week I should be able to catch my breath (famous last words) and maybe start to catch up on email, rss feeds, and cleaning.