Many years ago I saw an episode of Giada De Laurentiis making Spicy Mocha. I was fascinated even if it was too compliacted for early morning coffee.

One of my favourite things to do when staying in a hotel is make hot chocolate coffee.

About a year ago I realized I could make my own spiced mocha … even early in the morning!

One of the things I’ve been trying to change is how much sugar I use in my coffee. I began to change my habits by just store-bought hot chocolate mix. Yes, it likely contains more sugar per serving than I was using, but the first habit was to measure what I added. Now I keep emergency hot chocolate mix but I’ve found using less-than-i-expect cocoa mix and sugar doesn’t even require me to add milk!

I’m still using my aeropress, but that’s about as fancy as I get with my coffee. I buy store-brand pre-ground espresso!

One little trick I learned a while back was to brew with the aeropress inverted. 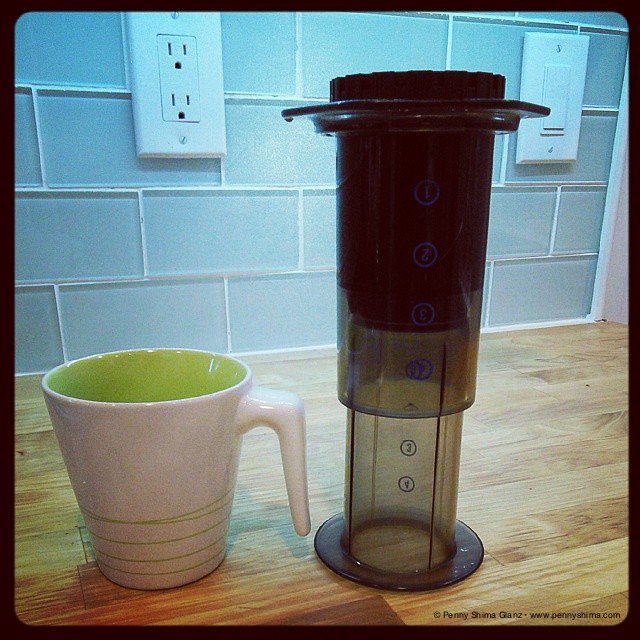 Why? Well, I had some filter leakage issues and this method is much better early in the morning when my eyes are barely open.

To make a single serving of my early morning spicy mocha:
into the mug
either

Pour boiling water into the aeropress like normal (I rarely bother to preheat the brewer) and mix (I use an orphan chopstick). Also pour a splash into the mug and mix into a loose slurry. Now you need to fish out the cinnamon stick, I have heatproof fingertips so i use the chopstick to get it up high enough i can grab it without putting my fingers into the coffee (though that would really wake me up!). Then I screw on the filter/cap and flip it onto my mug and press. I then dilute with water and if it’s still too hot a bit of milk.