With everything taken from her, Ileni steps toward her death. After spending most of her 17 years obtaining the training necessary of a Renegai sorceress, she enters the Assassins’ Caves an expendable failure, spurred by the distance she put “between herself and all the people who thought she was worthless”. She was sent there by the Elders and sworn to discover why two of their own had died within the past half year. Ileni was also charged with tutoring the young assassins in magic and uncovering the truth of her predecessors all while trying to stay alive and not revealing her own powerful secret.

Along the way, she discovers truths she hadn’t even admitted to herself, finds an unlikely ally, reveals long-kept secrets more fearsome than her own, and learns that the first step toward truth is the hardest.

Character I’d most like to have coffee with: The Master, while he is ruthless and coldhearted, his ability to sort through, process, and act on information is legendary… and he always has a reason, even if at the moment it makes sense only to him.

Yes, I’d also love to ask Ileni over for some coffee and talk about her plans too, but there’s the next book for that! ;) 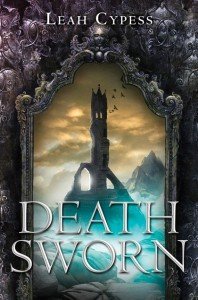 UNTIL MARCH 18 2014, this book is part of a Goodreads Giveaway! Enter for your chance to win.

A Second Giveaway! The author kindly provided me with several bookmarks to give away. Between now and midnight EST on 31 March 2014, please leave a comment and tell me which character (from any book you like) you’d to chat with over a cup of tea or coffee. Why that character?

My only requirement is that you also comment on just one other post with open comments on this site first.

Note: I moderate first time comments and will attempt to process them through promptly. I’ll use a random number generator to choose winner(s) based on the number of responses. I’ll email the winners directly on Tuesday 01 April 2014. Winners will receive at least ONE bookmark, I’m still deciding what else to include… I have a nice collection of bookmarks and other reader friendly gifts.

I received a copy of the ARC from the author as part of a blog tour. All thoughts are my own.