Shadow was thoughtful last week because he had to make a big decision. We believe he made the right choice. He’s a good kitten and we’re proud of him for thinking this through, learning a new skill (sharing), and donating his allowance monies for good … not that he spends everything on catnip (though he does like to take possession of toys if I’m not careful).

To begin, let’s rewind to a Sunday morning in June. E and I attended a workshop to learn about a special volunteer opportunity with our local humane society.

That sunny summer day we began to foster kittens.

Our first group was of five (yes five!) very energetic and talkative little ones. We loved them for a week while they played and grew ready for adoption. (Everyone in this group found their forever homes.) 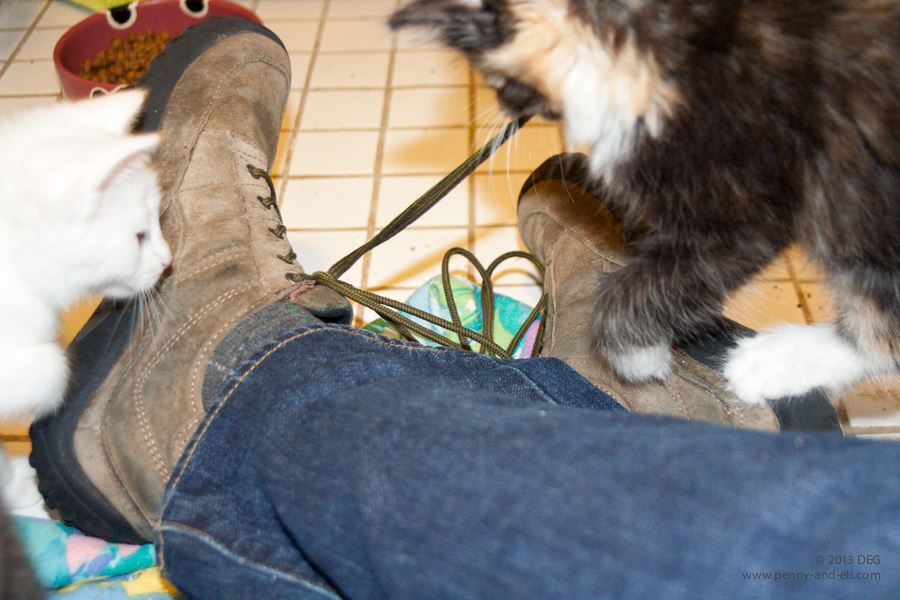 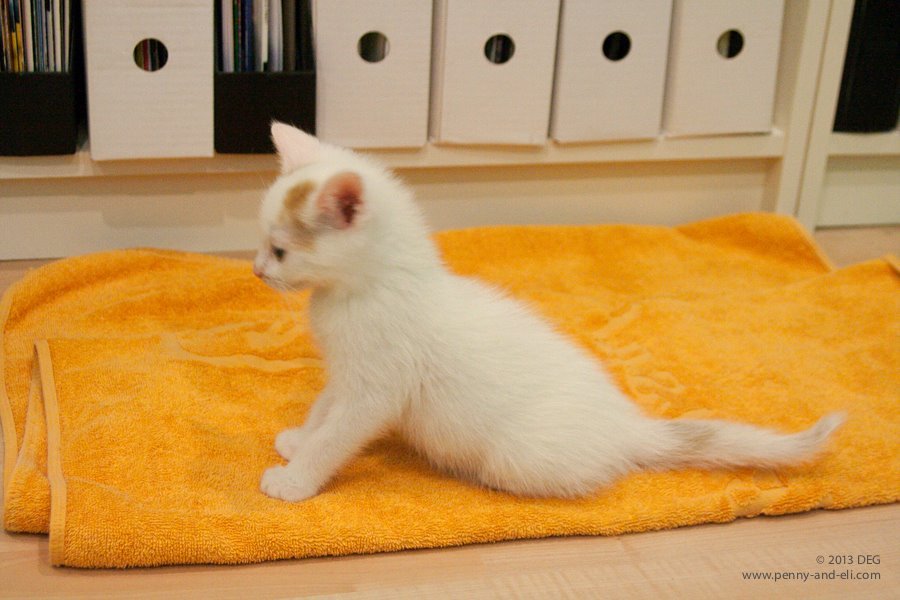 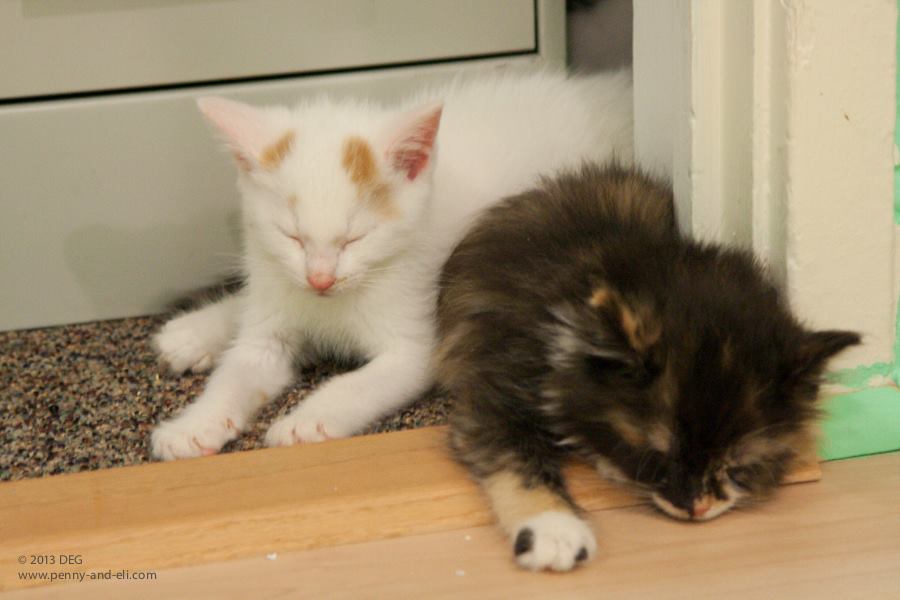 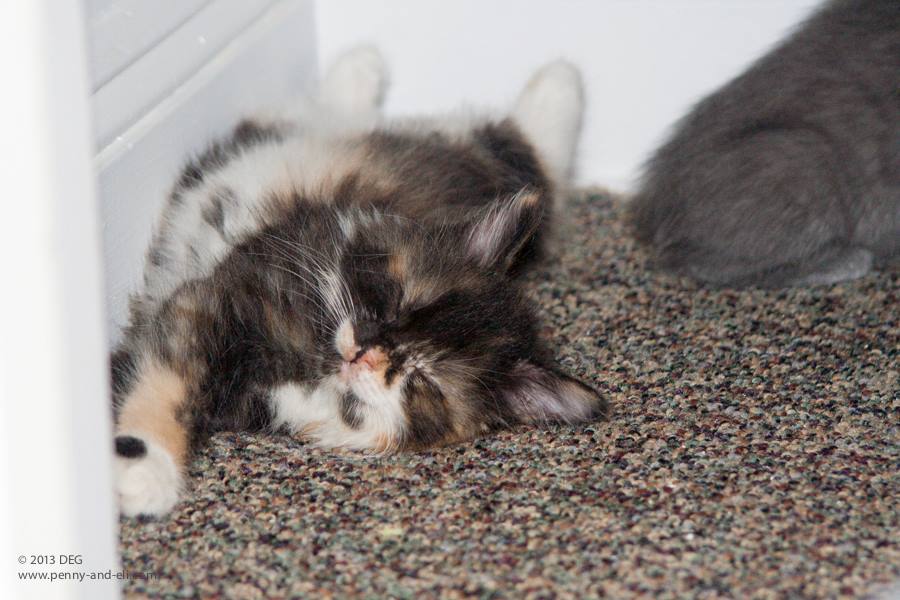 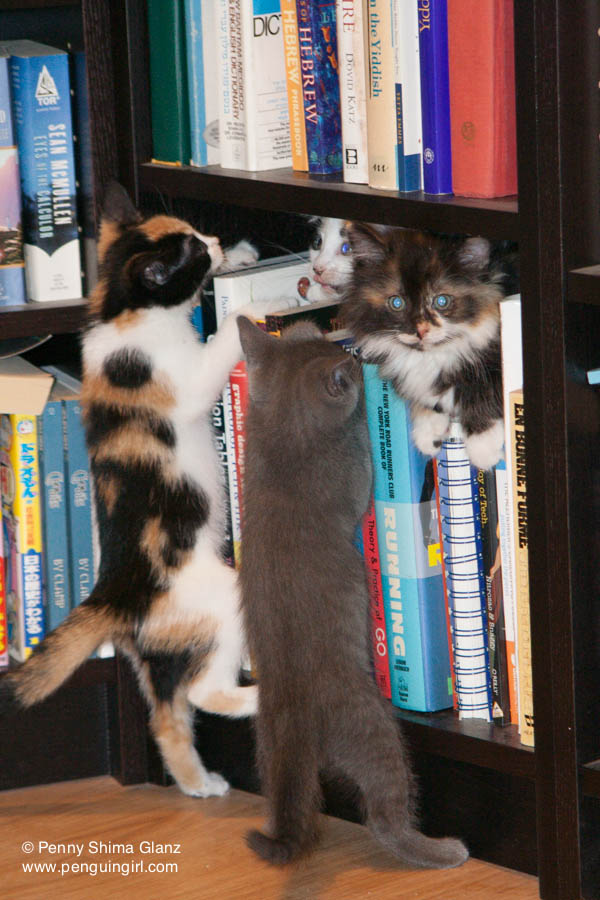 It was fun to see their personalities develop over the week. Were they hard to give up? Sort of. Individually we loved each one, but when we thought of all five together, well, it was a bit overwhelming!

The rest of June was quite busy I had a business trip and July was spent finishing up some projects around the house… so it took us until August to be available for fostering again.

These two girls spent two weeks with us while they recovered from an upper respiratory infection. Kitten sneezes are cute, but it was nice to hear their breathing improve and watch their appetites and energy return. These two girls love to jump and explore their world from a high vantage point. I didn’t get many photos of them as they were isolated for most of their stay. 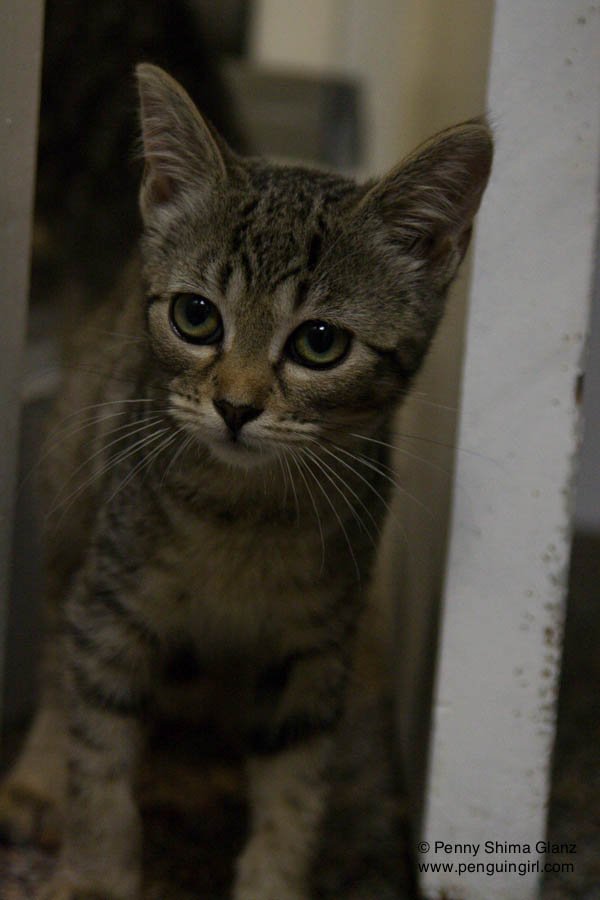 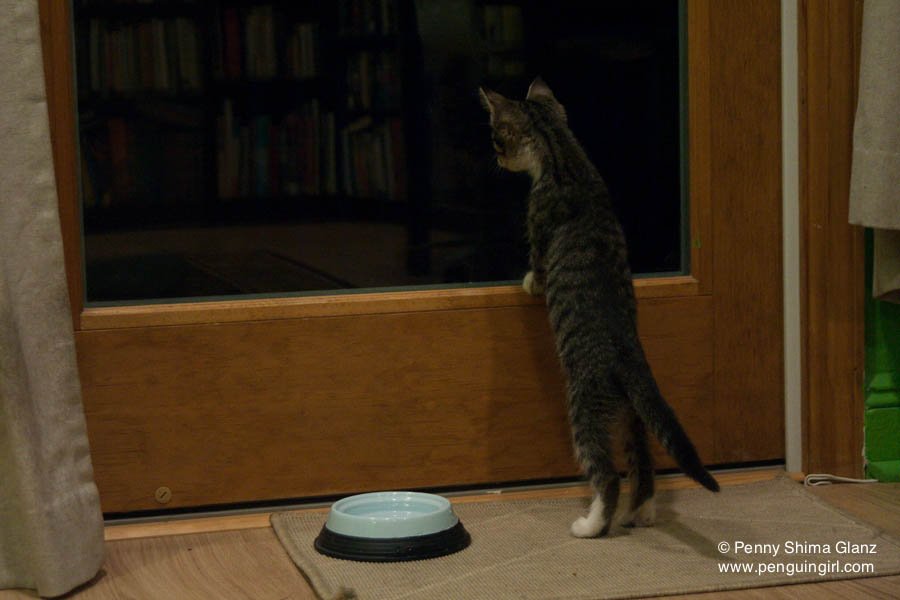 It was difficult to return these two. I basically handed off their carrier and ran out of the office!

So, what does Sir Shadow — who is frightened of everyone and everything — think of this fostering? He was scared silly of the first group, they outnumbered him, even if he outweighed them all combined. They would play in the library or E’s office and Shadow would come to the shut door and sniff and if anyone came near he’d run away and hide.

He was a little more interested when the girls arrived, I think because we’d disappear into the kitten room (an extra bathroom that came with the house that we’ve not fixed up yet) for an hour at a go and despite his fears, he is sometimes a curious cat! He didn’t quite know what to think of them but because of their illness we were serious about their isolation.

Two weeks ago a special little boy came to stay with us. He was a bit older than the other kittens and was still wary of people and needed a bit of special care to learn that humans could be kind and loving. The very first night Shadow barged into the kitten room to see who was crying and why he was so sad. The little one who allowed us to touch him and pet him from his safety blanket behind the toilet came right out and rubbed against Shadow and began to purr. Shadow was as shocked as we were and didn’t immediately run away.

You can see where this is going, right?

I tried to keep them separated but the little one and Shadow kept slipping through our barricades and were determined to be together.

I am pleased to introduce you to Buddy. 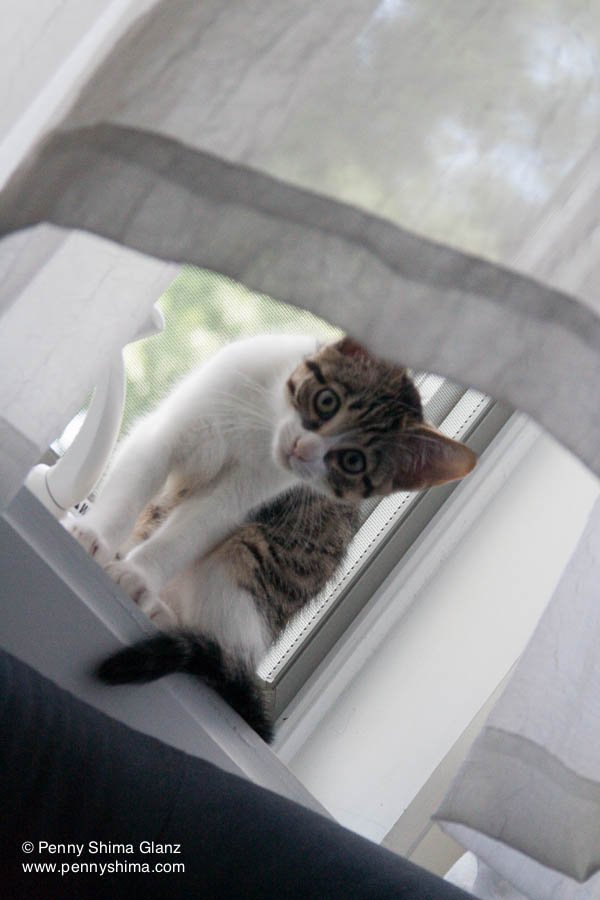 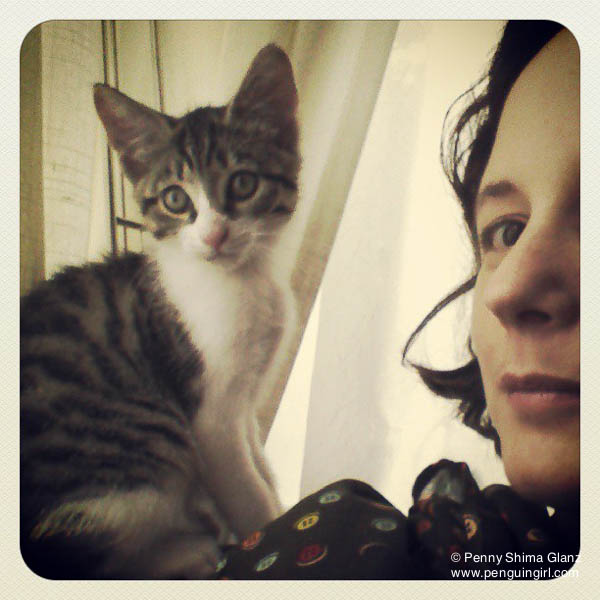 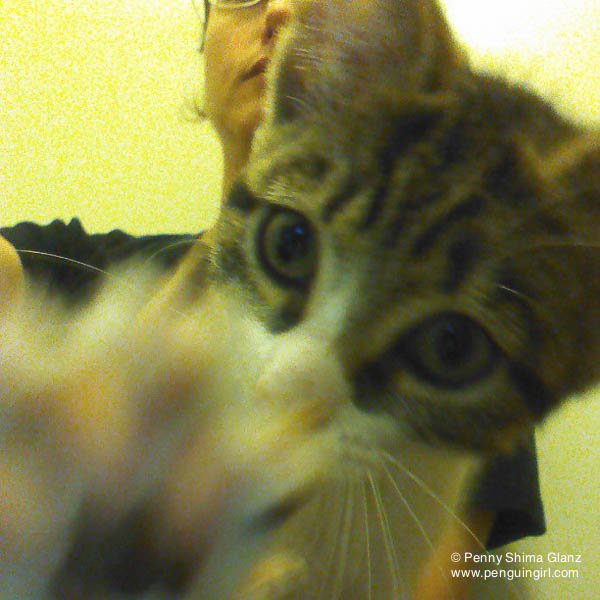 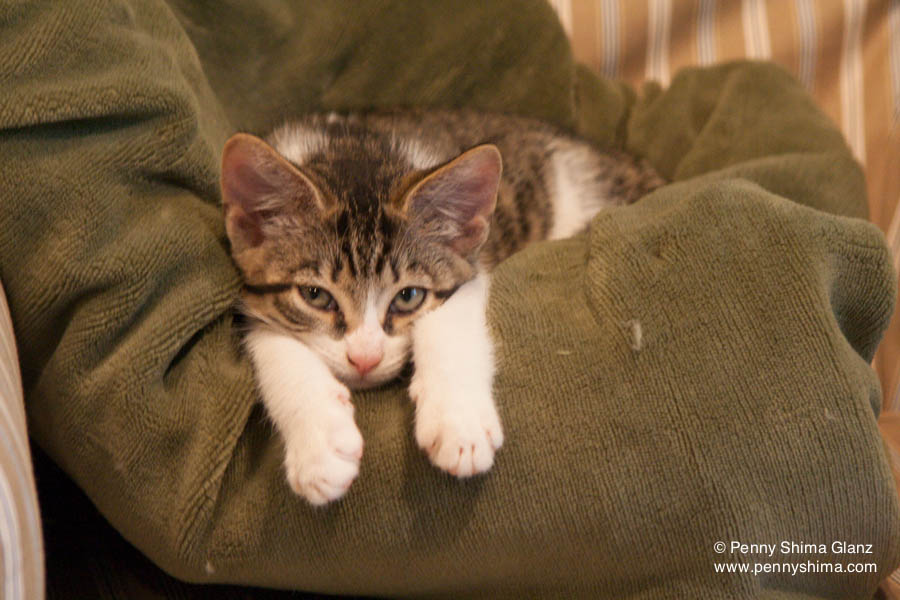 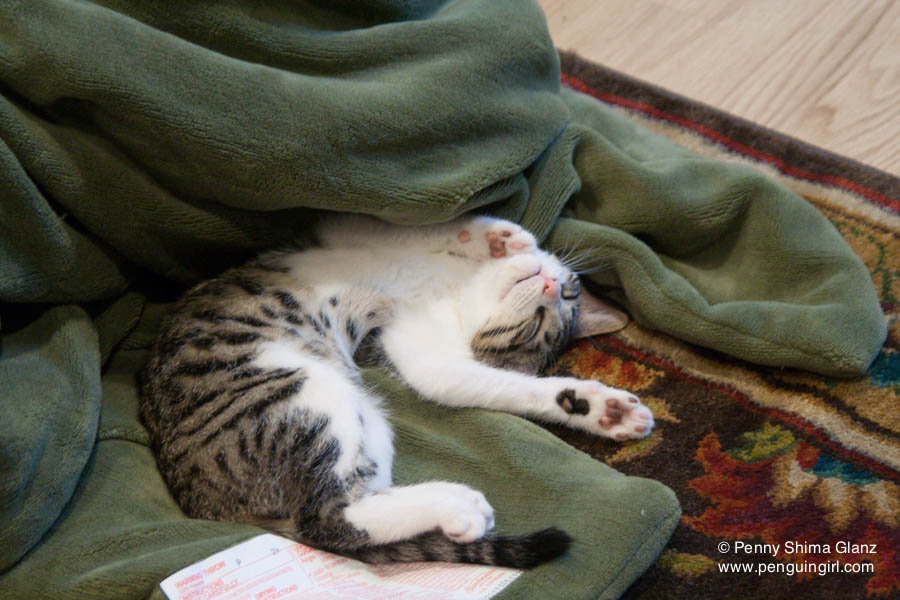 He adores Shadow and our Shadow loves him too. 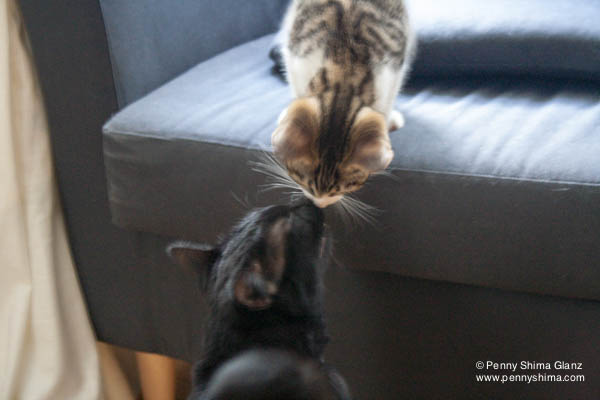 We will take care of the formal paperwork this afternoon, after Shadow finishes grooming him. It looks like our foster kitten found his forever friend in Shadow… and with us.

We hope to continue fostering, and will definitely make sure to do our best to borrow kittens in at least pairs from now on because the temptation to keep them is much less.

You can follow our fostering adventures at facebook and instagram. There may be a few more places in the future, but right now those have the most activity. You can learn about being adopted, donating, or volunteering with our local shelter at the New Rochelle Humane Society website.

And yes, we love Buddy too, even if he decided to show his appreciation of his new forever home by accomplishing this overnight, something Shadow never did! 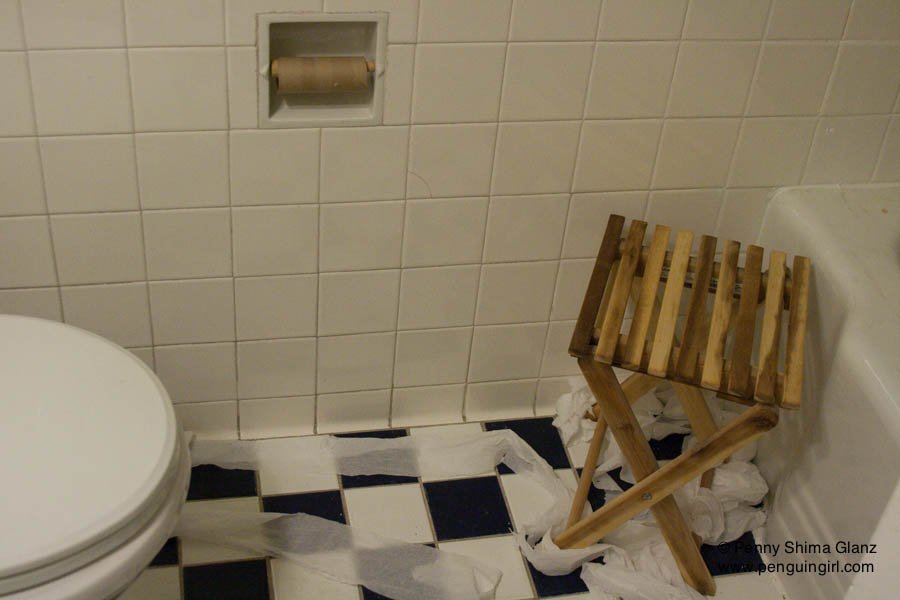