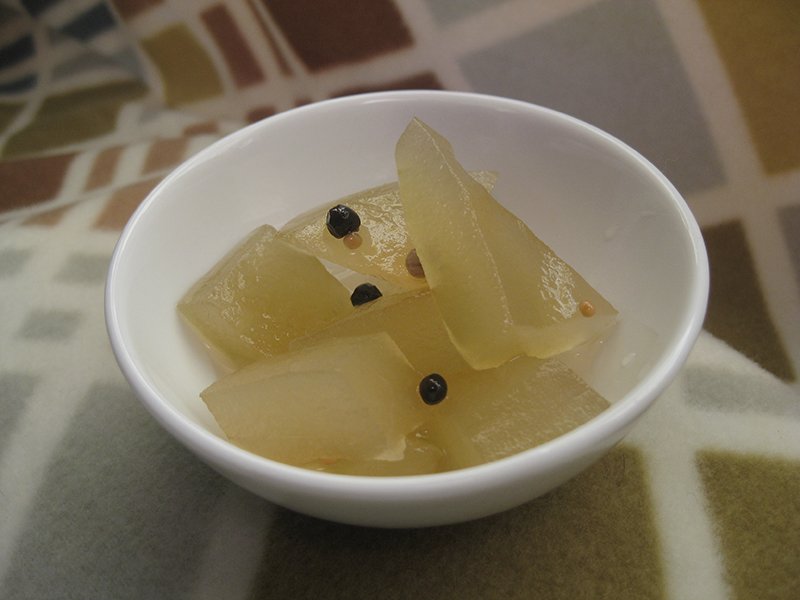 Oh January sun, you beguile with brilliant light and blue sky. The frigid weather results in endless soups and stews in our house, after a time we wish for a culinary reminder that summer will eventually return with warmth.

Last June, in the calm days before my summer was unexpectedly turned upside down, we made something I’d not done before, nor had ever tasted. At the time, many posts and updates in my social media streams were overflowing with photos of canning and preservation. It was something I’d been meaning to do; we bought a case of mason jars not long after moving in and I had grand plans for building my winter pantry.

Such grand plans that upon cutting a watermelon that warm June afternoon, I remarked to E that “everyone’s pickling the rind these days, do you want to try it?”. We decided, since that particular melon possessed a somewhat thick white rind, to jump on the bandwagon. We followed Paula Deen‘s recipe as it had the simplest list of ingredients that looked right to me. Everything proceeded as one would expect…

Until I realized I did not own a pot or even a metal bucket deep enough to process the jars properly. After much searching, I did not want to spend a considerable amount of money on this acquisition, we purchased one that would allow processing of three jars. So I sanitized, poured, processed, labeled, and put them in the pantry.

Every week or two while shelving our groceries, E would ask when we were going to eat them.

Not yet, I replied. Soon.

You see, I planned to serve them on the solstice. But I forgot. So we opened the first jar for New Year’s dinner. What a delightful treat! The texture is pleasant, the mild sweet taste reminds me of my mum’s bread-and-butter (cucumber) pickles, and they brought a taste of summer with smiles to the table.

What food do you miss most in January?