Who hasn’t fallen for gorgeous photography and mouth-watering descriptions when reading food blogs? And then tried the recipe but failed on an epic scale because the recipe wasn’t fully tested or required an obscure ingredient list a mile long or twenty different pots and a special machine?

I’m thankful that Deb Perelman is a picky eater and launched Smitten Kitchen. Not only does she tempt with gorgeous photography but her stories that lead to each recipe are enjoyable to read. Further, from my experience, her instructions are well-tested by someone who is passionate about cooking in a real (tiny) kitchen.

I’ve followed Smitten Kitchen on and off for years. Her site is always one I turn to for inspiration when I’m absolutely without ideas of what I might want to make. I often may just take one ingredient mentioned or even pull a colour from one of the photos and run with that as my starting point.

This Rosh Hashannah, I finally (after over seven years of marriage) baked challah for the holiday. I don’t make it often as I shouldn’t eat it due to that pesky wheat intolerance. Since I don’t eat wheat, I don’t often bake bread since only E is there to enjoy it, and Shadow to try to steal it. I have halfheartedly tried various challah recipes over the years without feeling that any were right.

So I was pleased to discover fig, olive oil and sea salt challah. And, yes, I ate some. It was delicious. I still don’t mind the consequences my indulgence created (I get a bright red nose). In my inexperience with stuffing breads and not having made sushi in years, it was overstuffed and erupted a little upon baking. It didn’t matter. The taste more than made up for it. So, for a few weeks, until E said he couldn’t keep eating it all, I made it without the stuffing. I’ve found my challah recipe. It has the flavour and texture I was looking for. I can even substitute in a bit of whole wheat without it going completely to pieces. I’ve learned the double egg wash makes the difference. 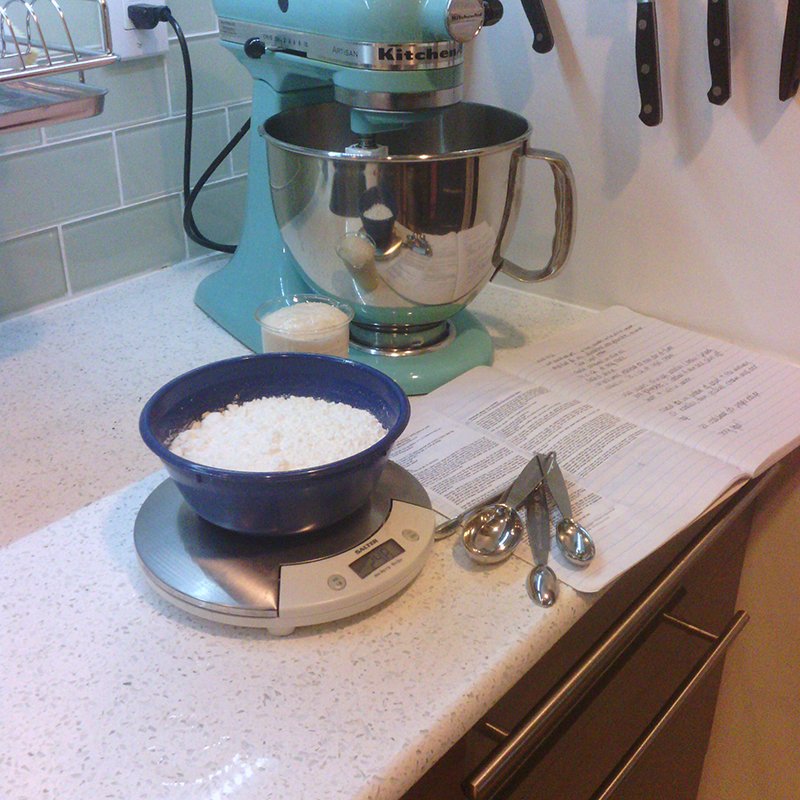 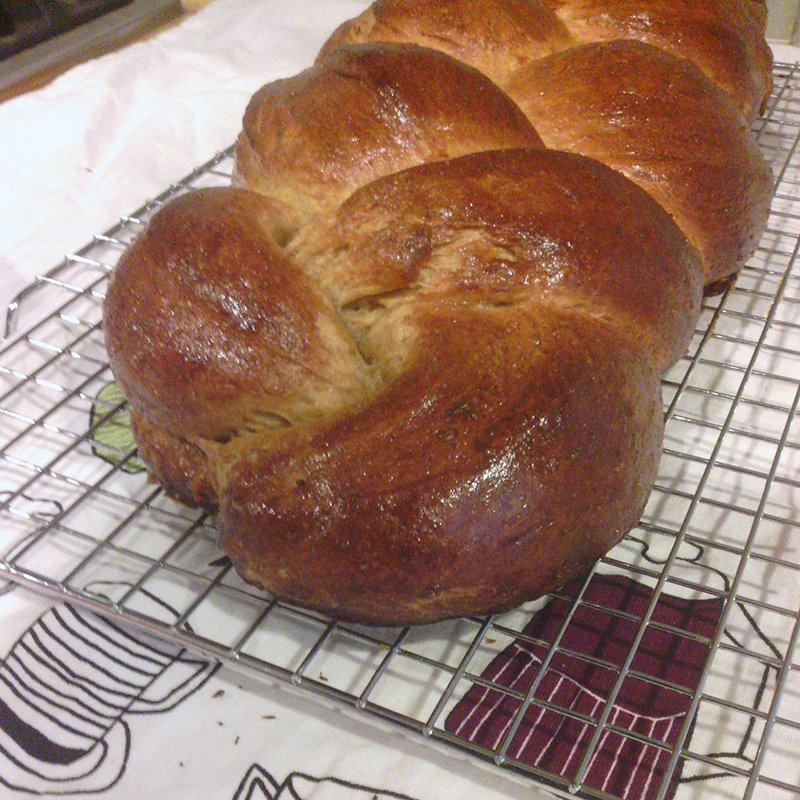 So, what else have I made? I’ve not kept as careful track as I’d like, but when my mother came to visit and see the new kitchen I wanted some finger food to set out. I wanted something I had never tried before that were crazy simple to make. So, I made a batch of homemade wheat thins. They really are super easy to make and I don’t know why I thought they were some complex recipe. Perhaps because I’d only had them as machine-made mass-produced items, I mistakenly thought you needed complex robotics to create a batch (guess who watches an obscene amount of How it’s Made?). What’s even better is you don’t even need a food processor or a stand mixer. The dough comes together quickly and requires a minimum of fuss. I’m still amazed at how simple this was to make. I rolled this first batch out by hand which was time-consuming as I have a tapered french rolling pin. Last week, while watching an old episode of Good Eats, Alton Brown essentially thwacked me over the head and I realized I have a pasta roller available for next time. Nom! (Again, I ate a few even though I shouldn’t.) Biggest lesson? Crackers are simple to make and taste much better. I have a list of gluten-free recipes I’ll try soon. 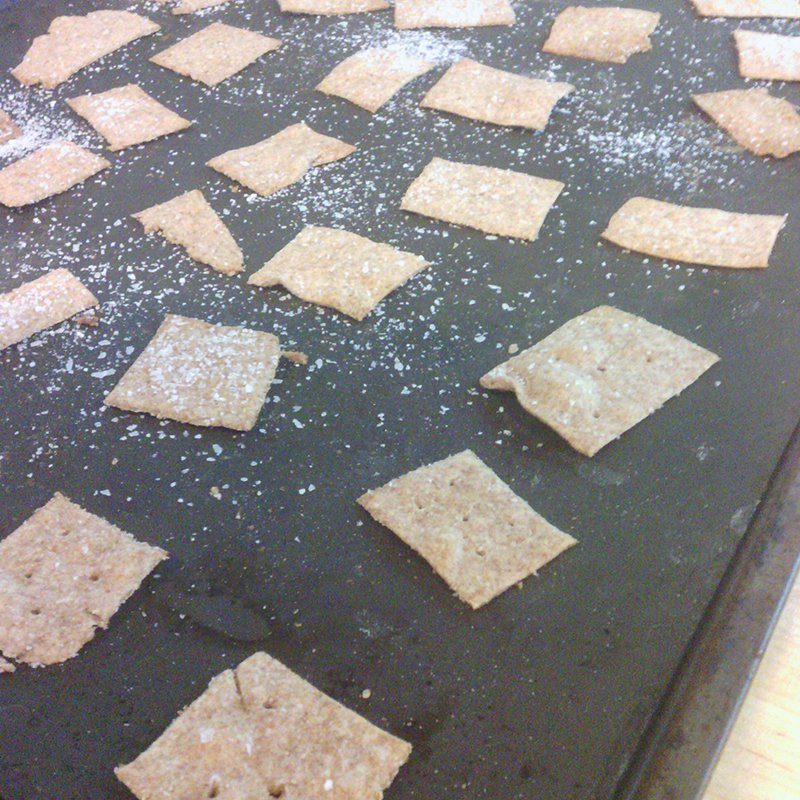 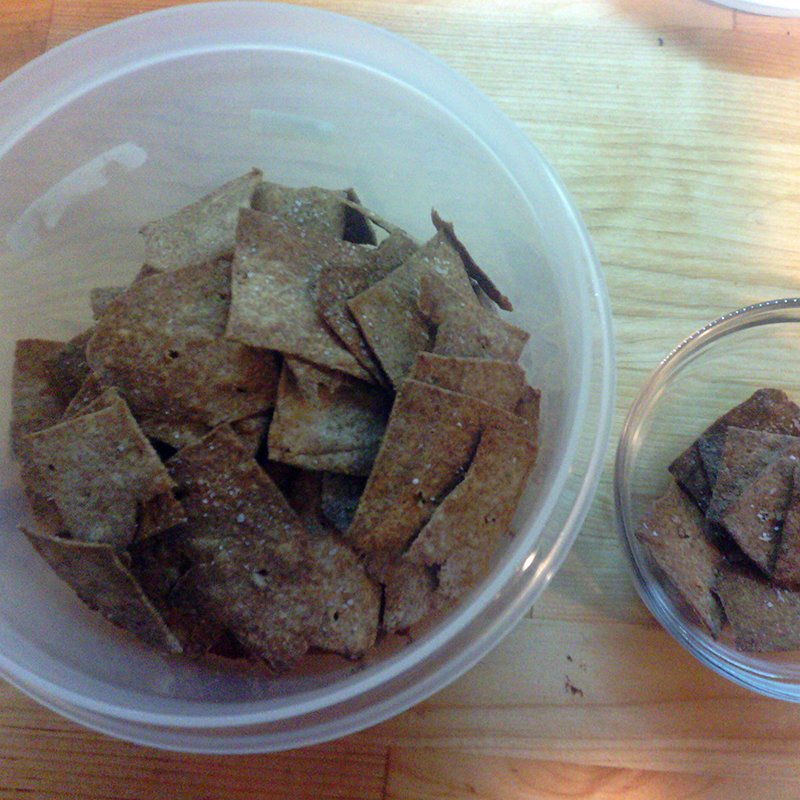 Ok, so I’ve now declared that I’m still smitten with the website, how do I feel about the book?

Often, when I hear a blogger, specifically a food blogger “got a book deal” I just roll my eyes. No, not out of jealously, but because I’m jaded. They all begin to feel the same and the trends drive me crazy. Then I hear that someone has made that deal and will be published and the anticipation builds to the point I actually will mark the book launch date on my calendar so I can stalk the library’s catalogue. Deb Perelman is one of those who made it into my calendar. Why? She has yet to steer me wrong, I love that even though she has accomplished all of this, she hasn’t lost her voice (in her writing).

Is this book worth it? Yes. It’s delightful to flip through and rediscover recipes in a different order than on the website. The book (I have only read through an ebook borrowed from my library at this point) feels deeper and richer– as if the flavours have had time to meld.

I’ve not yet seen the print-copy formatting, but the layout of the ebook flows well enough on my tablet. Of course the photography is superb and styled with those little details that make me super hungry and wanting to make each recipe that I can adapt to my diet. Who doesn’t want to reach for a cookie when there is a tray with one already missing to tempt you to burn your fingers, especially since someone else already eaten one!