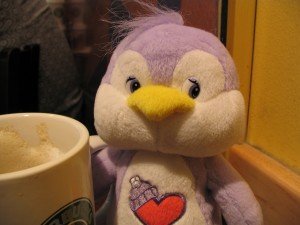 It’s the simple tasks and tools that often create the largest challenges. I came late to the coffee wagon. I still prefer tea, but a habit of a cup-ish of coffee in the morning at the breakfast table and again when I first sit down at my desk has become ingrained. My coffee habit began in grad school, I switched over from tea not just because it was seen as the drink of the cool kids, but because most tea is handed over beyond scalding hot. I once sat through an entire three-hour seminar waiting for my tea to cool off.

Those late nights lead to coffee in the morning and to a six-year quest to find a way to make coffee at home.

I know, it’s not a hard problem to solve, but we didn’t want to devote counter space to another gadget. I also did not want to have to buy lots of additional special things to make my solution work …

I’ve been through several french presses, which work, but I never wanted to get grounds specifically for a french press nor whole beans and a grinder. That meant that the standard grounds would find their way through the mesh filters and into every mug I poured. YUCK.

I have relied on instant coffee of both the plain and latte mix variety. It’s expensive and if I go the mix route, full of sugar and other icky stuff.

So I’ve struggled. So I’ve complained. I’ve desired a single serve brewer for years, but counter-space–even in our house–was something I was not willing to trade even for drinkable caffeine.

Two weeks ago, I accepted that I would soon need to replace the screen on my latest french press, a device in which I struggled to brew a single serving.

I complained louder and renewed my research.

Hearing my cries, a friend heartily recommended an aeropress. I was instantly intrigued and, with some research, won over. While a local chain store didn’t have it in stock, I ordered it online and began the continuous refresh of the delivery tracking page. Last week it was delivered to my doorstep days before I was told to expect the package.

It didn’t matter that it was after my current cut-off of 3pm for a cup of coffee. I tore open the package, cleaned the device, and brewed my first cup.

I fell in love instantly. I’m not sure what to say that hasn’t been said by others. While I’ve only brewed five times so far, I am still smiling after that first sip. I am excited and amazed to brew drinkable coffee at home!

What I appreciate the most out of this new system is how easy it is for me to clean up. After brewing, I take the bottom ring off, decide if I wish to rinse and reuse the filter, then head over to my kitchen compost bin and plunge the grounds in! There is no need to use a spoon, or add water to rinse them out, I just press and they are removed. My azaleas better appreciate all the coffee I’m drinking for them!

Disclaimer: I am just another happy customer.