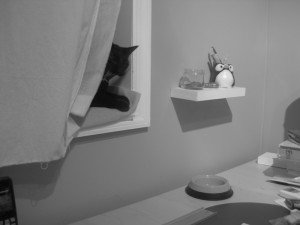 I read this NYT article on the mathematics of how cats lap liquids with interest. Shadow, however, just yawned and wondered when I’d refill his windowsill-side water bowl which he emptied again.

E and I keep glasses of water on our desks — they used to be for us until Shadow discovered them. He’ll test to make sure they’re water first (he doesn’t like seltzer) and sometimes test again. How does he perform his experiment? He’ll put his head in, sniff, pull his head out, put paw in, dunk, take paw out and shake it all over our desks. Then he’ll drink.

E’s desk is much tidier than mine and while it is only water, a wet paw on my desk could become a disaster in a disaster.

With the cooler weather, Shadow doesn’t have access to the sun room, so I brought that water bowl into my office and put it on my desk. Since it’s a bowl he’s familiar with, he doesn’t experiment with it and just laps. His window sill is heated, so I want to make sure he doesn’t end up dehydrated. He’s been emptying the bowl much more quickly than I anticipated, I’d forgotten how much hard work a nap and a yawn is.