In high school I ran track (and cross country). The winter and spring seasons often found me with a relay baton in my hands.

I’m sure I dropped the baton once or twice and screwed up the hand-off too but by and large I’ve been pleased that over the years I’ve been able to pass most any item around.

I break ceramics in spurts. I (knock-on-wood (or wool)) haven’t broken anything in a about a year. Most of our kitchen items traveled safely from Brooklyn to the house. Given that I had already sent the yarn North, I’m impressed. The biggest loss was a small ceramic mixing bowl that developed a hairline crack. Works quite well as a planter now!

Recently while checking out at the grocery store, as E went to put a container of jam on the belt I watched it fly through his fingers and crash spectacularly to the floor.

That set the stage.

About a week ago I asked E to go into the cabinet he was nearest to for the 1-cup pyrex measuring cup. Shadow was weaving between us begging for his dinner.

You see where this is going? Perhaps not as you think.

My husband opened the door and it banged pretty loud and Shadow jumped out of the way to find the quiet solitude of somewhere else.

Little did the cat know how smart he was.

As E handed me the cup I watched with horror as it slipped through my grip and shattered all over the kitchen floor.

Screaming “keep the cat out” I practically flung myself upon the zillions of tiny shards. We grabbed the vacuum and I even used it to complete two very detailed passes of the entire area while E guarded at the door.

The floor needed to be inspected at that close detail anyway. Right? Don’t worry, we’re all fine, the only one to come into close contact with the glass shards was the ever willing and humble shop vac. He’s doing quite well and enjoyed the attention I lavished on him. I strongly detest vacuums. Mum used to have to send me out with my dad so she could do a quick vacuum. I avoid them whenever I can. I’ll go upstairs and hide in the bedroom under the pillow while E and Shadow clean up. I’m not stretching the truth either. Shadow is less disturbed by them than I am. (I do prefer the sound of a shop-vac to traditional house-based vacuums.) However, I’m an adult and will sometimes put my personal needs aside for the greater good. I think I filled up my vacuum quota for the next few years. 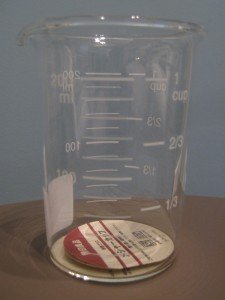 The loss wasn’t a really big deal. I’m an American, of course I have a bigger one somewhere! I have another 2-cup measuring cup, but it’s not the same to use as it’s both plastic and for the most part a cup too big for my needs. No, I have no idea why I have it or when I acquired it. Since the breakage we haven’t had a chance to go to the local kitchen supply store, so I’ve been making do and grumbling all the while. Ever make my weakness-processed-food instant mashed potatoes by eyeballing how much water you’re adding? To a pot you rarely use because it’s proportioned differently from all your others? It worked out well as we always complain that the serving size ends up too small. I think I made 6 servings when I was aiming for 3 (we tend to each eat about 1½ servings). Mmmm mashed potato overload (garlic & chives, YUM). Today while walking through Muji for inspiration and solitude (don’t you do that?), I picked up this simple measuring cup. Even more surprising (to me) is that it arrived home in one piece.

I’m not sure I have one. It wasn’t anyone’s fault. But it did remind me of some parts of the kitchen floor that needed some scrub brush attention that I hadn’t seen from my normal lofty vantage point.

Eventually I’ll probably replace this with a more drop-resistant one, but for the price (~$4, which around here is good) and the “beaker-ness” I couldn’t resist.