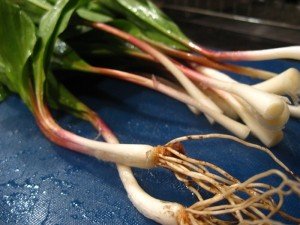 A few years ago I discovered Spring through a new medium, food blogs. Before this time, Spring meant waiting for the green things to grow big enough to eat (namely asparagus). The writing on these sorts of sites piqued my interest with raving about an hither-to-unknown-to-the-masses-ingredient — which should not be confused with it’s mere cousin the onion — ramps.

Despite regular and frequent trips to the green market it took until this year for me to acquire a bunch of my own and try to determine if the hype was worth it.

I admit I was skeptical, they looked rather ordinary.

Well, one family’s weed is the Michelin star rated gourmet meal of another.

The first time I cooked them (yes there was a second, and if I can get to the market this week and they’re still around a third or fourth) I caramelized them in butter with leftover rice and tofu.

I licked the pan (once it cooled down a bit).

Last week I scored another bunch and a bit of young spring asparagus. I made this.

I had to fight E (and the cat) for rights to lick the pan again.

So what do I really think? Are the worth the hype?

I’m a sucker for young spring anything, especially onions. These are just divine. To my amateur nose, they combine flavours of garlic with a hint of shallot and the taste isn’t overwhelming. It is different from what I’ve generally eaten as a spring onion. I believe that the flavour is richer with more depth. However, my impression could be formed in this manner because the two times I’ve cooked the ramps, I’ve made sure to caramelize them– that’s my preferred method to eat any onion as it appeals the most to me and my family.

If you find yourself in possession of a bunch of ramps I do encourage you to try them.

In the meantime I’ll keep wishing that my yard turns into a spontaneous wild field of ramps. 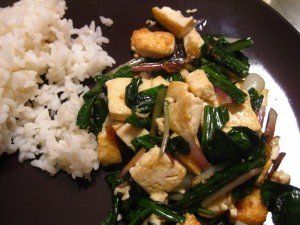 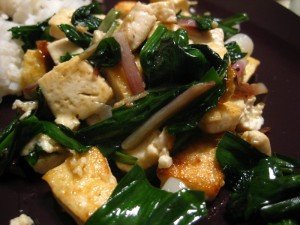 One Reply to “one farmer’s invasive crop …”