I’ve been an advocate of dual monitors for many many years now. I remember when I was still new at the Office and I discovered a dual-head card underutilized in someone’s machine. I snapped it up and scavenged for a second monitor and once it was set up increased my productivity in minutes — at the time I needed to maintain a certain application and it was much more efficient to have it and my email up to be viewed side by side.

But to each their own: I have a client who begged for a portrait monitor as he works primarily on documents and wanted to easily view each page in its entirely, as if it were printed. He loves it. Actually love might not be a strong enough word. It’s different, and I think that my work does not lend itself to that setup at this time, but I do see the benefit in it.

What’s brought this on? I’ve said for years I’ve wanted dual in my home office, but even when 15″ LCD’s had dropped to about $99 each, I hesitated. I knew I needed to replace tapuach (my 15″ powerbook) soon and was hesitant to spend the money on a monitor when I had survived so long without. A few months ago, E gave me permission to disconnect his (19″) monitor during the day and borrow the dual connection. It was a pain, but immediately my work went faster and easier. Shortly thereafter I began asking him to spend more time at the office so I could take full advantage of this borrowing-dual-scheme he began researching a dual solution of his own.

Last Sunday, that dream became a reality. He purchased two 23″ wide screens (with my complete blessing) and I acquired his “cast off”. I’ll comment only briefly on his setup.. it takes getting used to. They’re gorgeous (and heavy, we carried them 1 ¼ miles from J&R back to the car on Sunday). What’s interesting is that while both monitors are the same exact model, they are slightly different. We didn’t notice that from the box, but discovered it upon unboxing. If you look at the sticker placement and the buttons along the bottom you can see that. They are a month apart in production. 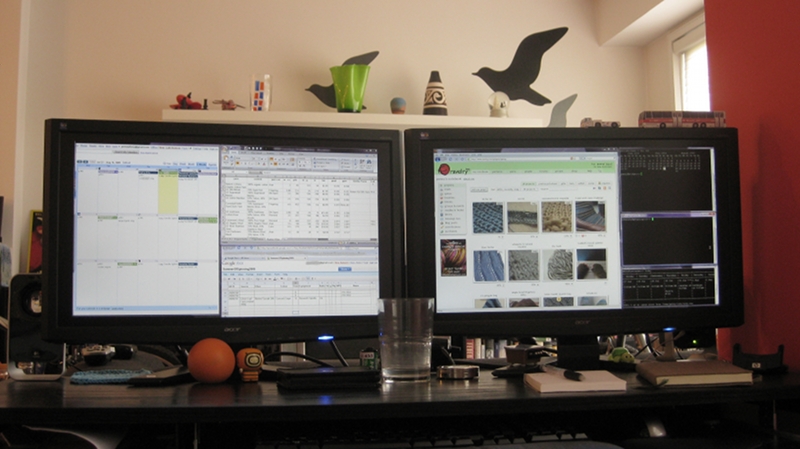 I’ve actually flipped around my setup since the first photo was taken, but as my desk is now even scarier, I will not take another incriminating photo until after I clean up.

One Reply to “dual”