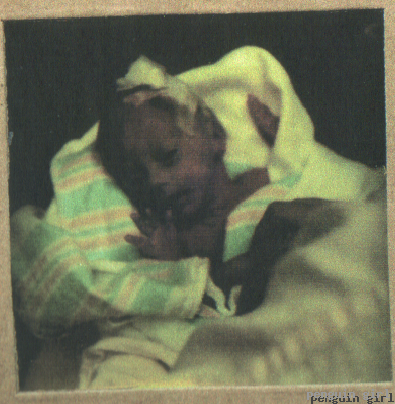 In just over 98 days I turn 30. Yup. That’s significant. It means I only have about 14 weeks to pull off something I’ve been thinking of for quite some time, which in a way is fitting. This project has been percolating since around 1994.

As most of you know, I’m a preemie. A one pound fourteen and a half ounce preemie. A preemie who has consistently disproven everything the doctors said about what her parents should expect from their only child.

As a preemie, my parents used to make a big deal of my birthday. While I once wanted my name in the card catalogue, I have never really liked being the centre of attention. I have memories of disastrous birthday parties where I cried. Let’s just say that if a group of individuals were to attempt to surprise me with something like that this year (or any year) I’ll kick their arse. Ok. That’s out of the way.

Anyway, while I don’t like a big deal being made that I’ve consistently broken expectations I do want to do something for others. There were lots of people rooting for me beyond my parents. Within the hospital, nurse L is credited with assisting my escape from the NICU after 98 days (I told you it’d come up again) because her thumb tipped the scale (and put my massive weight at just over 4lbs). For that, I am forever thankful. I believe that I am who am I today because of that amazing group of people. Many of whom I will never know nor will I know what they did to help me and my parents.

In 30 for 30 I plan to knit or crochet 30 items to be donated to those in need. I’m not going to commit to any one item because I learned enough from the cupcakes to know that it’s probably not possible. That’s ok. I’m going to try to focus on baby items; more specifically on preemie needs. In 1979 preemie clothing didn’t exist. I wore doll clothing for quite some time until I grew enough to fit into newborn stuff. For that matter, I still wear children’s clothing and shoes.

In an ideal world I’ll donate to the NICU of the hospital where I was born, but I’m too scared to go and talk to them and find out if they’ll accept donations (which is where the percolating since 1994 comes back in). So I’m going to just work on knitting and crocheting all my items and then will research where they’ll do best.

Do you want to help? Great. There are many ways you can help. Here are two:
1) You can donate to the non-profit organisation of your choice.
2) You can make something and donate it to an organization. Need help finding someplace? Try either Warm Up America or Charity Connection from Lion Brand. Do you want to learn to knit or crochet? Start looking here and if you’re in NYC I do recommend you try a class at the Lion Brand Yarn Studio. If you are serious about learning (and are someone I know or know someone who will vouch for you), I will send you some yarn and needles or a hook and work to find you someone to teach you.

My real goal is to get E and my mom to knit or crochet at least PART of one item. We’ll see how I do.